Who has seen Jurassic World? I’m anxious to see it as I was a huge fan of the original Jurassic Park from 1993. The idea is that scientists were able to clone dinosaurs from dino DNA that was retrieved from amber-trapped blood parasites. Great story, but it is built upon a foundation of irrationality.

The dominant paradigm of billions of years of evolution acting on genetic code to form all terrestrial life from a single cell ancestor is completely at odds with the historical account of the Bible. It is said in this dominant paradigm of scientism that the dinosaurs died out 65 million years ago.

The problem for this epic fairy tale is that the dates are wrong. The bards of this epic fantasy tell us that radioactive dating has proven that the fossil material recovered in archaeological digs is absolutely dated as older than 65 million years. The problem is that they have disregarded one of the Creationist’s best friend, Carbon-14 testing.

This article shows how the story of evolution is coming apart.

The CRSQ study authors tested seven dinosaur bones, including a Triceratops from Montana, hadrosaurids, a cartilaginous paddlefish, a bony fish, and fresh-looking wood and lizard bones from Permian layers in Canada and Oklahoma. Five different commercial and academic laboratories detected carbon-14 in all the samples, whether from Cenozoic, Mesozoic, or Paleozoic source rocks. 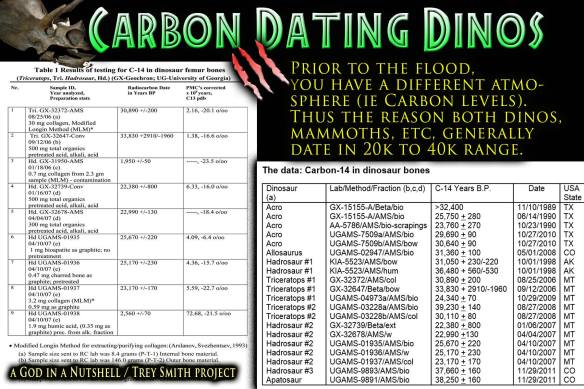 It’s a nightmare for old earthers like Hugh Ross and evolutionists.

But all of these dates verify the historicity of the Bible. At every point, we find that God’s Word can be trusted. We find that since we can trust God about his revelation of history, we can trust Him in his prophecy about our future.