…at least do it properly. Do a little research, and then shoot your best shot. Christianity has survived 2000 years of constant attack and persecution. 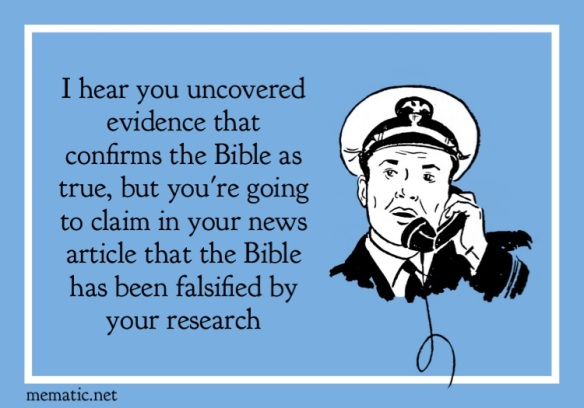 At least a dozen “science” reporting outlets falsely reported that the Bible got history wrong. If they had just done a few minutes of research by actually reading what the Bible said, they would see that forensic science is only JUST NOW catching up with divine revelation.

Here’s one of the headlines:

“The Bible was WRONG: Civilisation God ordered to be KILLED still live and kicking”

Sadly, God’s people were duped (Joshua 9) and flat out disobeyed in several other circumstances (Judges 1) to allow the Canaanites to live among them. The findings of this forensic research doesn’t conflict with the Bible…it confirms scripture!

Finding Canaanite DNA in living people is exactly what one would expect to find, because that is how the Bible reported it.

We can trust God’s divine revelation about history, and we can trust him with the forgiveness of sins. Jesus fulfilled the scriptures by taking on the punishment of sin and defeating death. It is his great love that leads us to repentance.

2 thoughts on “If You Want to Defame the Bible…”