As you look through the pages of the Bible, it is very clear that the universe is not billions of years old. Jesus’ own words in Mark 10:6 says, “At the beginning of creation God made them male and female.” 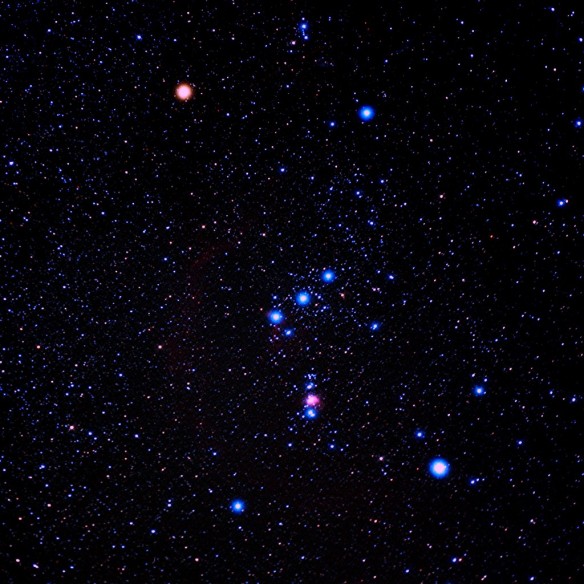 Orion agrees with Jesus. This short article from the scientists at ICR is worth the read.

Orion is one of the most well-known and easily recognized constellations of the winter sky. The three bright blue stars in Orion’s belt seem to draw our attention instantly.1 Such stars are a strong confirmation of the biblical timescale.

The evidence seems far more consistent with the biblical account—it appears that stars were supernaturally created only thousands of years ago. With blue stars scattered across the cosmos, our universe certainly “looks” young.

I haven’t even finished reading this article yet, but it’s so good that I want to share it on my blog before I forget or something comes up. The writer outlines clearly the point that people interpret evidence according to their worldview, so evidence cannot properly push someone into the Kingdom of God.

People must repent of their sins so that they can see the emptiness of their atheistic worldview. As Romans 1 says, “For the wrath of God is revealed from heaven against all ungodliness and unrighteousness of men, who by their unrighteousness suppress the truth. For what can be known about God is plain to them, because God has shown it to them. For his invisible attributes, namely, his eternal power and divine nature, have been clearly perceived, ever since the creation of the world, in the things that have been made. So they are without excuse.”

There is not enough evidence to convince an atheist that God exists, because they are suppressing this evidence.

There are some big words and complex ideas, but here are a few excerpts that I thought were very good. Still, the whole article is worth the read:

Defending the Christian faith (apologetics) is an injunction that wields a fruitful endeavor. Presuppositional apologetics is a Reformed modus operandi that commences and concludes with God, presupposes the veracity of Scripture, disproves the futility of human contrivance that obstructs truth, and argues that it is inextricable to deny the sensus deitatis (sense of deity) because it is intrinsically recessed internally which leaves everyone without reprieve.

Here’s the quandary: both are given evidence (Scripture), but there are two diametrically opposed conclusions. The affirmations brought into the evidence are their presuppositions. This is the contradistinction between a presuppositional apologist and an atheist: a presuppositional apologist (does not demand evidence for God’s existence) can corroborate their knowledge claims because of revelation from God, while the atheists cannot (demands evidence for God). The former justifies the very concept of evidence, while the latter does not.

This article is not denying evidence as edifying to a Christian. The creation account, the worldwide flood, parting of the Red Sea, and the miracles of Christ: casting out demons, cleansing the lepers, healing a man born blind, healing Peter’s mother in-law, raising the dead, restoring an ear, walking on water, stilling the storm, turning water into wine, feeding thousands and resurrecting gloriously and miraculously are all captivating proofs. Do all of the aforementioned miracles need to be given to a person who demands proof for God’s existence? Absolutely not! According to Thomas Aquinas: “To one who has faith no explanation is necessary. To one without faith no explanation is possible.”

What are the dissimilarities between an atheist and a theist? The atheist cannot account for anything as they appeal to their autonomous reasoning, and seek to justify doing so with their autonomous reasoning. How do they know their reasoning is valid? Apart from revelation, they cannot. A theist (Christian) can account for the laws of logic because of a super naturalistic worldview that is consistent with universal, abstract invariant entities, and is justified by revelation. This is why an atheist has to borrow from the Christian worldview because they are impotent of justifying anything apart from God.

An atheistic worldview cannot account for moral absolutes because they have no justification for absolutes of any kind. Most atheists will say that they are absolutely certain that there is no such thing as absolutes, which is self-refuting babble. Why can’t an atheistic worldview justify moral absolutes? If an atheist denies the existence of God, they lose their appeal to absolute knowledge and nothing could be absolutely morally wrong.

[Rom 8:18-25 ESV] 18 For I consider that the sufferings of this present time are not worth comparing with the glory that is to be revealed to us. 19 For the creation waits with eager longing for the revealing of the sons of God. 20 For the creation was subjected to futility, not willingly, but because of him who subjected it, in hope 21 that the creation itself will be set free from its bondage to corruption and obtain the freedom of the glory of the children of God. 22 For we know that the whole creation has been groaning together in the pains of childbirth until now. 23 And not only the creation, but we ourselves, who have the firstfruits of the Spirit, groan inwardly as we wait eagerly for adoption as sons, the redemption of our bodies. 24 For in this hope we were saved. Now hope that is seen is not hope. For who hopes for what he sees? 25 But if we hope for what we do not see, we wait for it with patience.